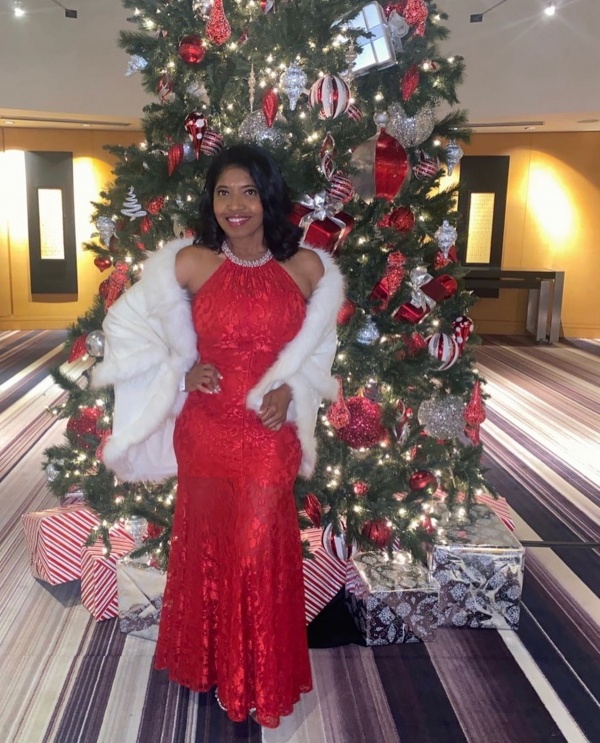 Published on January 8, 2013 by Sonya's Spotlight 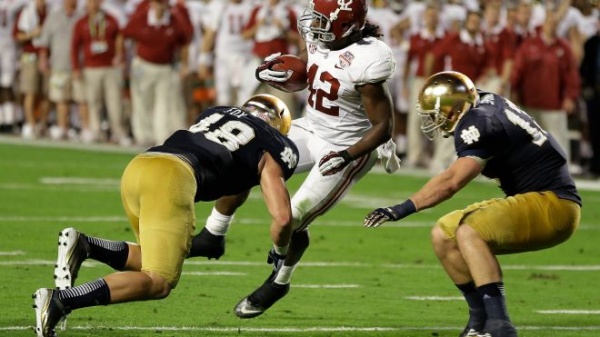 Jan. 7, 2013: Alabama’s Eddie Lacy spins past Notre Dame’s Dan Fox (48) and Danny Spond for a touchdown during the first half of the BCS National Championship college football game. (AP)

MIAMI GARDENS, Fla. – The coach no longer wears houndstooth. The result is the same. Another Alabama dynasty.

Quieting the Irish by the first play of the second quarter, Eddie Lacy, AJ McCarron and the No. 2 Crimson Tide rolled top-ranked Notre Dame 42-14 for the BCS championship Monday night, locking up a second straight national title and third in four years with another laugher of a title game.

The Bear would’ve been especially proud of this one — Nick Saban and the Tide romping to the second-biggest rout of the BCS era that began in 1999.

Lacy, the game’s offensive MVP, ran for one touchdown and caught a pass for another in the final minute of the opening half. He spun away from the vaunted Notre Dame defense not once, but twice, to cap a 28-0 blitz before the bands even got on the field.

Lacy finished with 140 yards on 20 carries, coming up with two of his best performances in the two biggest games of the year. He rushed for a career-high 181 yards in a thrilling victory over Georgia in the SEC title game, and was nearly as dominant against the Irish. McCarron wasn’t too shabby, either, completing 20 of 28 passes for four touchdowns and 264 yards, adding another dazzling effort on top of his MVP in last year’s title game.

You could almost hear television sets around the country flipping to other channels, a hugely anticipated matchup between two of the nation’s most storied programs reduced to nothing more than the second straight BCS blowout for the Crimson Tide.

“We’ve had a lot of really great football players who’ve worked really hard,” Saban said. “Because we’ve had a great team, we’ve been able to have a significant amount of success.”

Alabama (13-1) scored 69 straight points against its title game opponents, going back to getting the final 13 against Texas in 2010, followed by a stifling 21-0 victory over LSU for last year’s crown, then scoring the first 35 points on Notre Dame. Saban’s team made the Irish (12-1) look like a squad that would be hard-pressed to finish in the middle of the pack in the mighty Southeastern Conference, which has now won seven straight national championships.

The Crimson Tide will likely wrap up its ninth Associated Press national title, breaking a tie with Notre Dame for the most by any school and gaining a measure of redemption for a bitter loss to the Irish almost four decades ago: the epic Sugar Bowl in which Ara Parseghian’s team edged Bear Bryant’s powerhouse 24-23.

Bryant won five AP titles during his brilliant career. The way things are going, Saban might just chase him down.

The diminutive man with the perpetual scowl has guided Alabama to the top spot in the rankings three times since arriving in Tuscaloosa in 2007, and if he’s serious about finishing his career with the job he has, there seems no reason he can’t win a few more before he’s done with “The Process.”

Already, Saban is the first coach in the BCS era to win national titles at different schools, capturing his first at LSU during the 2003 season. Now, he’s the first coach with back-to-back BCS titles, and given the youthfulness of his team, Alabama figures to go into next season as a heavy favorite.

In an interesting twist, Saban’s fourth college title came in the stadium where he had the only stumble of his coaching career, a two-year tenure with the NFL’s Miami Dolphins that ended ugly, with the coach insisting he wasn’t planning to leave — then bolting for Alabama just two weeks later. His tactics may have been underhanded, but it’s hard to argue with the call he made.

Before a record Sun Life Stadium crowd of 80,120 that definitely included more green than crimson, Lacy ran right through Te’o and the Irish on a 20-yard touchdown run before the game was 3 minutes old, capping an 82-yard drive that was longest of the season given up by the Fighting Irish.

It would only get worse. Alabama marched right down the field on its second possession, this one a 10-play, 61-yard pounding that finished with McCarron completely faking out the defense and lofting a 3-yard touchdown pass to Michael Williams, standing all alone in the back of the end zone.

On the first play of the second quarter, T.J. Yeldon powered over from the 1 to make it 21-0, the finish to another impressive drive — this one covering 80 yards — that included two long completions by McCarron. First, he went to Kevin Norwood on a 25-yard gain. Then, he hooked up with freshman Amari Cooper for a 27-yard gain to the Notre Dame 6.

By that point, it was clear to everyone that Notre Dame’s hopes of winning its first national championship since 1988 were all done. But Alabama just poured it on.

Lacy’s 11-yard touchdown reception with 31 seconds left in the half left the Irish fans shaking the heads in disbelief, while the Alabama faithful broke out that familiar “SEC! SEC! SEC!”

Alabama made it 35-0 on McCarron’s second TD pass of the night, a 34-yarder to Cooper without a Notre Dame defender in sight.

The Irish finally scored late in the third quarter, a 2-yard run by Everett Golson that served no other purpose except to end Alabama’s remarkable scoreless streak in the BCS title games, which stretched to 108 minute and 7 seconds — the equivalent of nearly two full games — before the Notre Dame quarterback fought his way into the end zone.

The only BCS title game that was more of a blowout was USC’s 55-19 victory over Oklahoma in the 2005 Orange Bowl, a title that was later vacated because of NCAA violations.

About the only time Alabama stumbled was when McCarron had a miscommunication with his All-American center, Barrett Jones, in the closing seconds. The fiery McCarron shouted at Jones, who just shoved him away. But as the seconds ticked off, they were right on the same page, hugging Saban and celebrating another title.

Notre Dame went from unranked in the preseason to the top spot in the rankings by the end of the regular season. But that long-awaited championship will have to wait at least one more years. Golson completed his first season as the starter by going 21 of 36 for 270 yards, with a touchdown and an interception. But he got no help from the running game, which was held to 32 yards — 170 below their season average.

Kelly had vowed this was only beginning, insisting the bar has been raised in South Bend no matter what the outcome.

“We made incredible strides to get to this point,” he said. “Now it’s pretty clear what we’ve got to do to get over the top.”