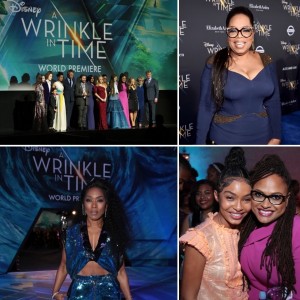 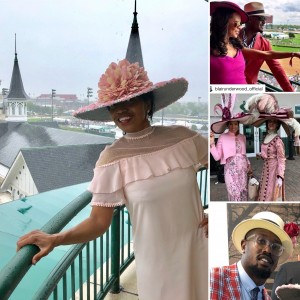 Chadwick Boseman Celebrates the Class of 2018 at Howard University Commencement 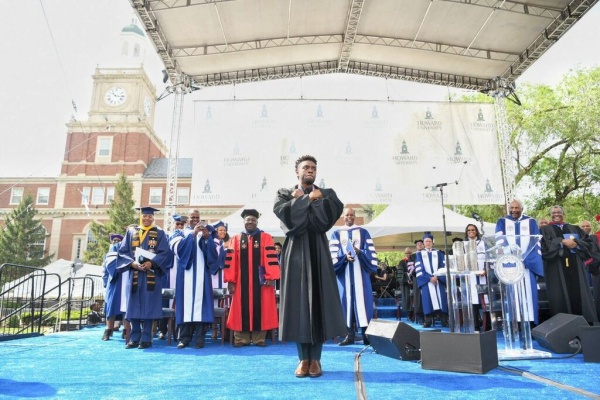 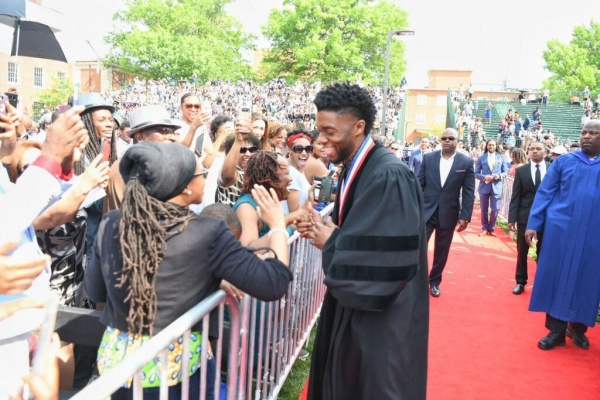 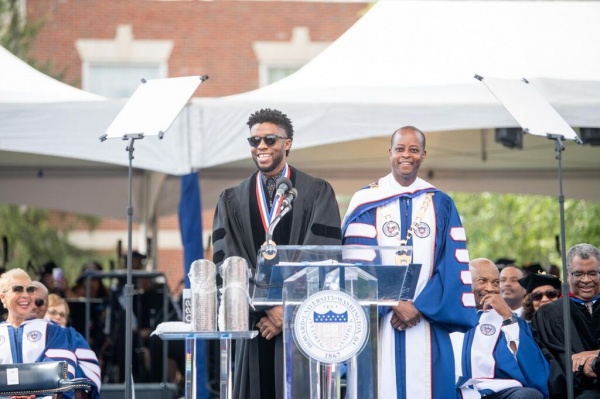 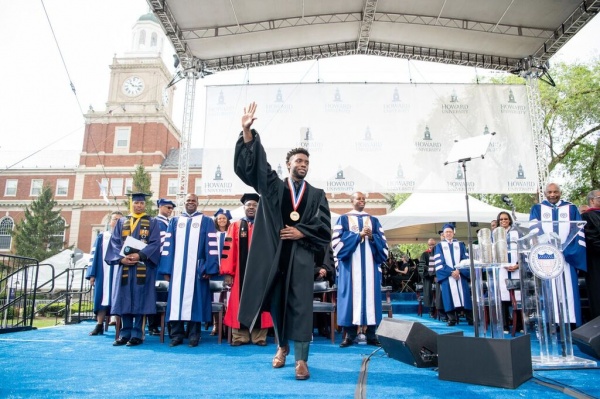 Howard University alumnus and award-winning actor Chadwick Boseman spoke to graduates about the significance of making it to the top of the Hilltop during theHoward University 2018 Commencement Convocation.  In front of an audiences of more than 8,000 family and friends, Boseman encouraged the graduates to not only exceed in their next steps, but also strive to achieve their life’s purpose.

“When you have reached the Hilltop and you are deciding on next steps, you would rather find purpose than a career. Purpose is an essential element of you that crosses disciplines,” said Boseman.

He applauded the members of the class of 2018 for climbing up their academic slopes and making it up the Hilltop.

“The Hilltop represents the culmination of the intellectual and spiritual journey you have undergone while you were here,” said Boseman. “Each of you have had your own difficulties with The Hill, but it’s okay because you made it on top. Sometimes, you need to feel the pain and sting of defeat to activate the real passion and purpose that God predestined inside of you.”

Boseman also declared Alma Mater, “a magical place — where the dynamics of positive and negative seems to exist in extremes.” He referenced an inspirational moment he experienced when meeting the iconic Muhammad Ali on the University yard; highlighting how at Howard, magical moments can happen to give students powerful encouragement on their toughest days.

“I remember walking across this yard, when Muhammad Ali was walking towards me with his hands raised in a quintessential guard. I was game to play along with him,” said Boseman. “What an honor to be challenged by the G.O.A.T. I walked away floating like a butterfly…walked away light and ready to take on the world. That is the magic of this place. Almost anything can happen here.”

A native of South Carolina, Boseman graduated from Howard University and attended the British American Dramatic Academy at Oxford University. Thereafter, Boseman began his career as an actor, director and writer. He starred as T’Challa/Black Panther in the worldwide phenomena Marvel Studios’ “Black Panther” and “Avengers: Infinity War.”

Boseman’s breakout performance came in 2013 when he received rave reviews for his portrayal of the legend Jackie Robinson in Warner Bros’ “42.” He previously starred in the title role of Open Road Films’ “Marshall” alongside Josh Gad. The film tells the story of Thurgood Marshall, the first African-American Supreme Court Justice, who graduated as valedictorian from Howard University School of Law in 1933.

This year’s Commencement Convocation marks the commemoration of Howard University’s 150th graduating class. Howard UniversityPresident Dr. Wayne A. I. Frederick said the University’s establishment represents one of the most noteworthy accomplishments in the history of American colleges and universities.

To the Class of 2018, Dr. Frederick encouraged the graduates to be bold as they embark into their chosen careers.

“Don’t stand safely on the sidelines; take risks, learn how to be wrong. It is the best way to learn and grow,” said Dr. Frederick. “Build a culture of generous listening so that others may be emboldened to take risks, too.”

Howard University is awarding 2,217 degrees, including 343 master’s degrees, and 90 Ph.Ds. More than 382 students received professional degrees in law, medicine, pharmacy and dentistry. Howard University has the only dental and pharmacy colleges in the District of Columbia. The 2018 graduates represent 39 states and 32 countries; 117 graduates are from the District of Columbia.

In addition to Boseman, who received the honorary Doctor of Humane Letters, the 2018 Howard University honorary degree recipients included:

Vivian W. Pinn, honorary Doctor of Science. Pinn was the first full-time director of the Office of Research on Women’s Health at the National Institutes of Health (NIH), and was associate director for research on women’s health at NIH. She held these positions from 1991 until her retirement in 2011. During that time, she established and co-chaired the NIH Committee on Women in Biomedical Careers with the NIH Director. Since her retirement, she has been named as a senior scientist emerita at the NIH Fogarty International Center. Pinn came to the NIH from the Howard University College of Medicine where she had been professor and chair of the Department of Pathology since 1982, the third woman in the United States to hold such an appointment. She was honored by the College of Medicine as one of its “Magnificent Professors” in 2014.

Colbert I. King, honorary Doctor of Humane Letters. King writes a weekly column that runs in The Washington Post. In 2003, King won the Pulitzer Prize for Commentary for “his against-the-grain columns that speak to people in power with ferocity and wisdom.” King joined the Post’s editorial board in 1990 and served for several years as deputy editorial page editor. Earlier in his career, he was an executive vice president of Riggs National Bank, U.S. executive director of the World Bank, a deputy assistant secretary at the Treasury Department, minority staff director of the U.S. Senate’s District of Columbia Committee, a State Department diplomat stationed at the U.S. embassy in Bonn, Germany, and a commissioned officer in the U.S. Army Adjutant General’s Corps. King grew up in Washington. He is married to Gwendolyn King, whom he met at Howard University while they were both undergraduates.

Gwendolyn Stewart King,honorary Doctor of Humane Letters. She is president of Podium Prose, a speaker’s bureau and speechwriting service in Washington, D.C. Prior to the launch of the company, King was the senior vice president of corporate and public affairs for PECO Energy Company (now known as Exelon) until her retirement in 1998. From 1989 to 1992, she served as the eleventh Commissioner of Social Security. She held high-level U.S. government appointments in Inter-Governmental Affairs, Women’s Business Enterprise and Social Security from President Ronald Reagan, Bill Clinton, and George W. Bush Administrations. King graduated cum laude from Howard University and has received the Alumni Award for Postgraduate Achievement. In 2008, she and her husband established the Gwendolyn S. and Colbert I. King Endowed Chair in Public Policy at Howard University.

“Our 2018 honorary degree recipients are individuals who have reached great success in their respective professional fields. Each honoree embodies the spirit and aspiration that guides Howard’s mission of excellence in truth and service,” said Dr. Frederick.

Chadwick Boseman talked about his excitement to return back home to Howard University this weekend to serve as the speaker for the 150th Commencement Ceremony May 9, on LIVE with Kelly and Ryan

“I think anytime I get on stage I feel that nervous energy…butterflies. But it’s an honor to go back and encourage that are doing great things and give people the hope and experience the nostalgia of being back there. I’m a little nervous, but I’m excited more than anything.”

Boseman recalls that during his graduation, actress Angela Bassett received an honorary doctorate. Recently she played his mother in the blockbuster film, “Black Panther,” which he considers a full-circle moment. He will receive the honorary Doctor of Humane Letters on Saturday.

“So think of who in the audience will be playing some role in your life after you give this commencement,” said Ryan Seacrest. “You’ll have to keep this alive.”

View the interview segment below:

Chadwick Boseman to give commencement speech at Howard University

LIVE with Kelly and Ryan