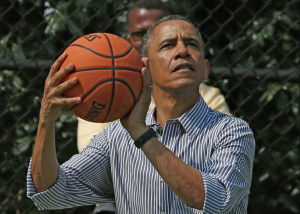 President Obama’s NCAA Tournament Bracket Is For The Culture »

SIMONE BILES AND HER US TEAM-MATES PROVED THAT THEY ARE CURRENTLY AN UNTOUCHABLE FORCE AS THEY BLEW AWAY ALL OF THEIR RIVALS TO WIN THE WOMEN’S GYMNASTICS TEAM TITLE AT RIO 2016 ON 9 AUGUST.

Biles’ samba-themed performance as the last competitor put the finishing touch to USA’s trouncing of the seven other teams, who were left scuffling for silver and bronze. 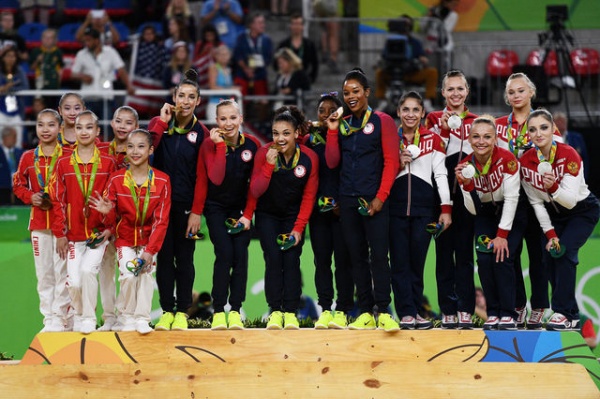 There were a few wobbles, even for the normally unflappable Biles, but those imperfections did not stop them sweeping to victory by a massive 8.209 points over second-placed Russia. China finished third to claim the bronze.

The USA’s margin of victory was the biggest at any international tournament since the open-ended scoring system was introduced to artistic gymnastics in 2006. The Americans put in such a commanding performance that Biles needed to better a target of just 7.591 points with her final floor performance to secure her first Olympic medal and deliver a second consecutive team title for her country.

So her score of 15.800 left her and her four team-mates – Gabby Douglas, Aly Raisman, Laurie Hernandez and Madison Kocian – whooping with joy as they clinched top spot on the podium.

Biles credited the victory to teamwork and diligence. “I think we are so successful because we believe in ourselves,” Biles said. “It hasn’t been easy but we have done everything we could have done to get where we are.”

Biles’ team-mate Hernandez also said the triumph showed how hard the competitors worked for one another.

“This is my first really big competition so to get a team gold from that, it’s just insane. We come into workouts every day with a very determined mindset, and just to get everything done, and that really showed off today.

“We’re always building each other up and making sure that we’re cheering for each other and shouting ‘C’mon, you got it, confidence’. Before we even got out on the floor Martha (Karolyi, USA national team coordinator) told us: ‘Just do what you’ve been doing in the gym, you guys have been training so hard, all the repetitions are going to pay off.’ We did just that.”

On the team’s nickname, Hernandez said: “We came up with the ‘Final Five’ because this is Martha’s last year. She believed in us and I think that’s why we’re all here. When we told her the name and what the meaning was, she started crying.”

Team member Raisman said it was an incredible feeling. “It hasn’t sunk in yet. Coming out in this arena it feels like you’re in a movie or some kind of insane, amazing dream. We kept that energy going and we stayed calm. Of course you are nervous, but we just did exactly what we did in training.”

Russia’s lacklustre work on balance beam and floor exercise forced them to rally for a podium finish on their last apparatus, vault, where they jumped ahead of China to claim silver. Second place was reward enough for Mustafina, one of three survivors from the silver medal-winning Russia team from 2012.

“We were expecting a good performance and we did it,” Mustafina said. “It is obvious that USA are much stronger right now.”

China took bronze, a result that Shang Chunsong lamented. “It’s not bad,” Shang said. “I still feel a little sad because we made two big mistakes, on uneven bars and floor (exercise). If we only made one mistake, we might have won the silver medal.”

President Obama’s NCAA Tournament Bracket Is For The Culture »